A refined Chevy Malibu sits in the far corner of the UW EcoCAR lab as a reminder of UW’s second place finish last year in the three-year automotive engineering EcoCAR2 competition sponsored by General Motors.

The EcoCAR group is hoping to match that success in the current EcoCAR3 competition, a four-year process to redesign a Chevrolet Camaro to be as energy efficient as possible while keeping its performance.

Teams participate in yearly competitions to show of their designs and test their cars. This year the team has been working on the design they'll use for the car, and from May 29 to June 4 they'll present their work, along with 15 other teams, for the EcoCAR3 Year One Competition held in Seattle. One piece of the competition is a trade show featuring all the teams, and on June 1 the show is open to the public from 1-5 p.m. at the Renaissance Hotel's Courtyard Ballroom.

“How well a team did the previous year will indicate how much they will get done the next year,” said Ryan Mallory, controls team lead for UW EcoCAR. “The competition does have a compounding effect that is apparent every year. The reason we got second is that we had a car that worked almost flawlessly. Ultimately, we knew what worked and what didn’t.”

In 2014, more than 40 UW students from the engineering, communications, and business majors – at times putting in 70 hour weeks -  worked on the final stage of the EcoCAR2 challenge, competing against 16 other universities across North America to transform the 4,000-pound car into a hybrid electric vehicle. The first year was spent on design, the second year on implementation and the third year refining and putting the car to real-world tests.

“We’re really proud that we got second place because we were up against these powerhouses who have been competing in competitions similar to this one for over 30 years,” said Kate Kitto, UW EcoCAR's communications manager.

Now, some of the same students who worked on EcoCAR2, as well as many new faces, are working on the expanded, four-year EcoCAR3 challenge. The Chevrolet Camaro will be stripped down to its core skeleton and then the team will rebuild it with new energy-efficient components and controllers.

EcoCAR3 is a year longer than the EcoCAR2 competition was, giving teams an extra year to implement and refine the design they have created during this first year.  The team won't have an actual car to work with until this winter, but even in this first year as many as 90 students worked on the UW EcoCAR team, with everyone divided into sub-teams based on their majors and area of expertise.

“Something truly unique about this program is the massive interdisciplinary nature of the work we do,” said Alex Ong, UW EcoCAR's business manager. “From my perspective as a business student, I think of this as pretty much a small business. There are definitely a lot of different components that come together to produce the final product.”

To maintain the success and momentum of EcoCAR, graduating seniors are advised to train successors and ease them into their team roles before they leave, often for companies where they can directly use their experience from the competition, such as General Motors and Tesla.

“People really stay in the loop,” said Kitto. “All the people who are graduating this year want to come back in year four and see the finished product of what they helped design.” 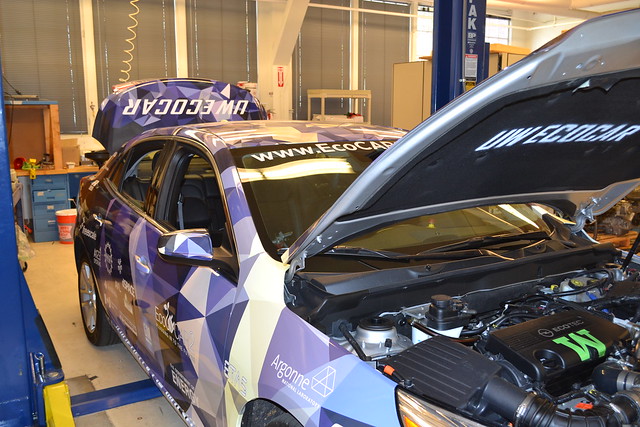