One of the most visible buildings on campus is also one of the most sustainable. The Husky Union Building (HUB) is recognized with LEED Gold status for its sustainable features both large – such as the cooling system – and small, like the materials in the bowling alley.

Most of the sustainability features were part of the renovation that turned the HUB from a dark and unwelcoming place to an open and vibrant student community center three years ago. As part of the renovation planning a group of 16 students, two faculty and two staff set out to design a HUB everyone could be proud of.

“A number of students who worked on the committee came back and said that we had realized their dream,” said Paul Zuchowski, the HUB’s associate director. “We put into concrete and building material what they had hoped for. I think that was the highest compliment we could get."

The original facade still stands, but the renovation committee started over with the interior of the 260,000-square-foot building. The atriums, ballrooms, lighting and offices are all new, designed to create a more inviting and active campus student activity center. The first floor of the HUB before the renovation

“Before, it was very hard to navigate and connect,” said Zuchowski. “The open atrium makes it easier to see and be seen.”

It's also more energy efficient, with tons of natural daylight. Air constantly circulates through the windows up top, providing better ventilation throughout the entire building. Before the renovation, only one section of the HUB was metered. Now, the entire building’s energy usage can be tracked using UW’s Smart Grid.

“What most people don’t know is that the HUB is not air conditioned,” said Zuchowski. “UW has a chilled water loop system that cools air in spaces throughout the HUB. It’s definitely cost effective.”

Throughout the process, the renovation committee tried to be environmentally conscious as possible, so much that almost 50 percent of the material from the old building was recycled into the new one. Travertine stone from the original structure was recut and repurposed in the new walls, including some of the steel, rebar, and concrete. Benches throughout the building and the conference table in the ASUW boardroom were all made from reused wood. Whatever couldn’t be salvaged was recycled – 95 percent of it.

Even the old bowling alleys were used to create something new for the revitalized building.

The HUB bowling alley has been around since the early 1950s and was once used to fulfill UW’s mandatory physical education requirement. Now, students and the community at large use it recreationally.

Since the old lanes were worn out and outdated, the construction crew installed new, synthetic lanes, but salvaged the original wood planks. You can see some of the original lanes - they were used to construct the shoe-rental counter and benches. The rest of the wood was used to create workbenches for the HUB's maintenance crew.

“The building is important, but it’s what goes inside that makes the building what it is,” said Zuchowski. “It’s here for the students and the many activities that they do.”

After all, students were the ones who voted to increase their student activities fees to pay for nearly 85 percent of the $83 million renovation cost. UW paid the rest.

"It’s very rewarding seeing the growth in students and what they learn and takeaway,” said Zuchowski. “Students can be very, very creative. They were the ones that wanted the building to be more than just a silver rating, and we’ve certainly achieved that.” 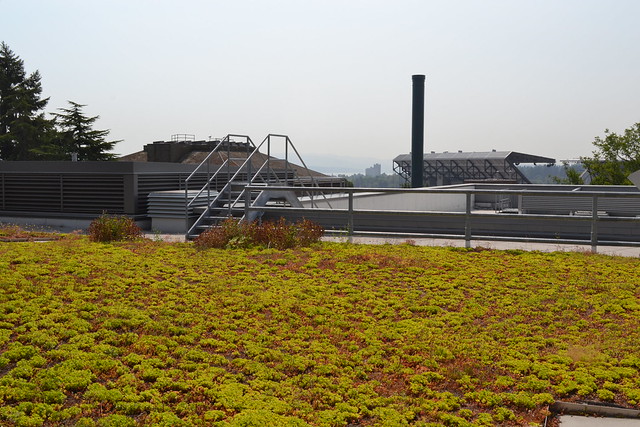