Racial justice at UW: Activism’s past and future Emile Pitre, one of the UW’s Black Student Union founders and a longtime staff member in the Office of Minority Affairs & Diversity (OMA&D), talked about his experience as a student civil rights activist at UW in the 1960s and the activism work he’s seen at UW since. Pitre was then joined by Cynthia del Rosario and Daaniya Iyaz for a panel discussion touching on the current state of activism at UW and what they see for the future.

This event was part of a series organized by UW Sustainability, the Campus Sustainability Fund and the UW College of the Environment's Diversity, Equity & Inclusion office. We have been working together to explore the intersections between sustainability and equity, and to encourage collaboration between the groups working on these issues across the UW.

As a UW graduate student in the late 1960’s, Emile Pitre was one of the founding Black Student Union members whose calls for equity to university leadership led to the establishment of what became OMA&D. Since then, he has spent over three decades with the organization, serving in various roles including tenures as director of the Instructional Center and associate vice president for assessment. Pitre’s dedication to advocacy and educational opportunity for underrepresented minority, first-generation and low-income students at the UW is unparalleled, and since his retirement in 2014, is known as OMA&D’s “elder statesman” and historian.

After graduating, Pitre worked as chemist and educational planner, but ended up rejecting an offer that would have paid $20,000 more to return the UW in 1982 and serve as the head chemistry instructor with OMA&D’s Instructional Center. Seven years later he was promoted to director. During his tenure, the IC won two University Recognition Awards and more than 11,000 IC students earned UW bachelor’s degrees. Pitre went on to serve as OMA&D assistant and associate vice president for assessment, and is currently in a part-time role as senior advisor to the vice president.

For over 20 years, Pitre has served as an advisor to the UW’s Black Student Union. He also led the production of an award-winning documentary in 2007 that highlighted the BSU’s role in the establishment of OMA&D. In 2008, Pitre and the other founding BSU members were presented the Odegaard Award together.

Pitre is a member of Phi Beta Sigma, Inc., and has held various leadership roles within the fraternity. In 2010, he received the Sigma Inspirational Award for dedication of service to education and selected as the 23rd member of the Western Region Distinguished Service Society (DSS) in 2018. Pitre has been the recipient of several other honors including the UW Professional Staff Organization Award for Excellence, and has three academic scholarships in his name. Pitre’s most recent recognition was the Charles E. Odegaard Award, regarded as the highest achievement in diversity at the University of Washington.

By the time of his retirement in 2014, he was recognized as an “elder statesman” of the Office of Minority Affairs & Diversity, not only for his knowledge of OMA&D history but also for his dedication to student success throughout his career.

Pitre has long been entrenched in documenting the history of OMA&D and is writing a book on its 50-year history. An avid photographer, he is known to photograph several OMA&D and UW events. 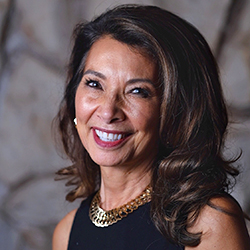 Cynthia del Rosario, iSchool Diversity Programs Advisor
As the University of Washington Information School’s diversity, equity and access officer, del Rosario has helped develop policies and practices to increase the number of students and faculty of color. She works to foster an equitable educational and social learning and work environment and to help iSchool students, faculty and staff advance in their knowledge and approach to equity and inclusion. She serves on numerous university and community boards and committees, including the iSchool Diversity Committee, the UW Asian Pacific Islander American Faculty and Staff Association, and the UW Diversity Council. Daaniya Iyaz, Environmental Health masters student, Campus Sustainability Fund committee member
Daaniya Iyaz’s interest in the environment began in high school, but she learned about the interplay between the environment and ethics throughout her time at UW. As a master’s student in Environmental Health, she is passionate about helping communities develop resilience to climate change. When Daaniya is not in class, she spends her time as a member of the Campus Sustainability Fund to work on implementing solutions at the intersection of environmental and social sustainability for the UW community. She also conducts research regarding lead levels in drinking water and alternatives to fast fashion. Daaniya aims to use her expertise to help foster solutions based in sustainability and equity for disadvantaged communities as well as for future generations.

The UW Libraries have put together a research guide on Student Activism, which includes many different resources to learn about student movements in the 1960s and 1970s.

How can the framework of a Just Transition* be applied to UW?
To address climate change, societies will need to transition away from extractive and polluting economies to build more resilient and inclusive communities. But how can this just transition be implemented at the University of Washington through the new Sustainability Plan?

This event included a panel discussion (posted above) and was followed by breakout discussions to reflect on how to turn ideas into actions. Terrell Engmann, co-founder, Basilica Bio
Public Health is one of Terrell Engmann’s foremost passions. As a recent Molecular, Cellular, Developmental Biology Graduate from the University of Washington, he embarked on a five month international journey spanning eight countries via the Bonderman Fellowship. Terrell spent his time as a Bonderman Fellow gaining perspective in regard to health equity and biological interventions abroad, visiting hospitals, labs, and reproductive health facilities along the way. With this experience in mind, Terrell is determined to see unprecedented change in his community by dismantling practices that disparately affect health outcomes. He co-founded Basilica Bio in early May 2020 in an effort to help empower the people most affected by pollution and food insecurity among other environmental factors. He is currently pursuing a PhD in Biomolecular Sciences and is involved in chronic disease research. Community health, environmental justice, and educational outreach are all areas he hopes to leverage for the benefit of all. Chesca Ward, UW Graduate School
Chesca Ward has been with the UW since 2006.  She is currently the HR director for the UW Graduate School.  Prior to joining the Graduate School she served as the manager, People and Organizational Change for the HR/Payroll Modernization Program; director, Organizational Development/Human Resources, UW School of Nursing; director, UW Business Diversity Program; and diversity specialist in the UW Office of Minority Affairs and Diversity. Chesca is also an adjunct faculty member of Seattle Pacific University’s Industrial & Organizational Psychology graduate program, where she teaches Diversity & Globalization. She has a BA in Biology from the University of Pennsylvania and an MA in Industrial & Organizational Psychology at Seattle Pacific University. Judy Twedt, UW PhD student, Climate Data Sonification
Judy Twedt weaves together climate science and digital sound arts to create data-driven soundtracks that bring greater expression and immediacy to climate communication. A native of Tacoma and fifth-generation Washingtonian, she has a master’s degree in Atmospheric Sciences where she used state of the art global climate models to understand Antarctic sea ice variability. Her pieces blend data sonifications with natural sound recordings to promote greater awareness of our rapidly changing planet. Her research combines work in Atmospheric Sciences and the program on Digital and Experimental Arts to create new sonic forms of climate communication, and to study its impacts on listeners. No stranger to interdisciplinary work, her Bachelors degree from Colorado College was in History and Philosophy, with an emphasis on environmental ethics.

*Just Transition is a placed-based vision and a community-based process that emerges from dialogue to address climate change and social injustices. It is rooted in a green and inclusive economy that fosters new opportunities, especially for those being disproportionately impacted by structural inequities and climate change, while transforming power structures.

Summit: "At the Intersection of Social and Environmental Justice"

The first event was held on July 30, 2020. The Summit "At the Intersection of Social and Environmental Justice" featured space for small-group discussion around sustainability and racial justice. See a recap of some of the discussion below.

At the Intersection of Social and Environmental Justice - Highlights

Co-hosted by College of the Environment’s Diversity, Equity and Inclusion office and UW Sustainability

I. What does sustainability mean to you from the lens of social justice?

II. What is your idea for how we can take action at the UW?

III. What does Racial Justice mean to you from the lens of social justice?

IV. What is your idea for how we can take action at the UW?